As I looked into what was out there on white identity, I was dismayed to find Jared Taylor’s book White Identity: Racial Consciousness in the 21st Century among the first and most prominent search results. Taylor essentially advocates white supremacy, segregation and racial superiority and completely dismisses the notions of white privilege.  While I generally advocate civility across differences, I found Taylor’s perspectives frightening, damaging, and outright racist.  Consequently, it was understandably disappointing to for Taylor’s work to be the primary search results of “white identity”.

A simple internet search proves that the loudest people talking about white identity are the blatant-racists and people of color. It was disappointingly tough to find any other voices in the mix. No wonder white people have such difficulty understanding ourselves!

In this spirit, I wanted to create a list of resources that speak to developing white identity from a position of cultural humility and value for understanding ourselves in light of both our history of racial oppression and a modern desire to create an equitable society for people of all backgrounds.

Pondering privilege: Toward a deeper understanding of whiteness, race and faith

For many white people, race can be a difficult subject to navigate. Some have never discussed the issue at all and may have no idea where to begin. Others, viewing themselves as colorblind, see no need to think about the issue at all. The topic grows even more difficult within the Christian church where it is no secret that Sunday mornings are often more racially divided more than united. Regardless of white people’s ignorance or inability to discuss racial issues, however, they are not going away.

Rooted in the concept of cultural humility, Pondering Privilege provides white people an opportunity to spend time more deeply reflecting on their personal perspective of and communal role in race relations by exploring why white people don’t talk about race, why they need to talk about race, suggestions for productive ways to discuss race, and how to deal with anger in race relations. Each chapter includes discussion and reflection questions and is ideal for personal or group use.

From Amazon: “Racial privilege is hard to see for those who were born with access to power and resources. Yet it is very visible for those to whom it was not granted. Understanding White Privilege is written for individuals and those in organizations who grapple with race every day, as well as for those who believe they don’t need to. It is written for those who have tried to build authentic professional relationships across races but have felt unable to do so. It is written for those who believe strongly in the struggle for racial justice and need additional information to share with their friends and colleagues. Inviting readers to think personally about how race–theirs and others’–frames experiences, relationships, and the way we each see the world, Understanding White Privilege focuses squarely on white privilege and its implications by offering specific suggestions for what we each can do to bridge the racial chasm.”

White privilege: Essential readings on the other side of racism
by Paula S. Rothenberg

From Amazon: “Studies of racism often focus on its devastating effects on the victims of prejudice. But no discussion of race is complete without exploring the other side–the ways in which some people or groups actually benefit, deliberately or inadvertently, from racial bias. This is the subject of Paula Rothenberg’s groundbreaking anthology, White Privilege.

The new edition of White Privilege once again challenges readers to explore ideas for using the power and the concept of white privilege to help combat racism in their own lives, and includes key essays and articles by Peggy McIntosh, Richard Dyer, bell hooks, Robert Jensen, Allan G. Johnson, and others. Three additional essays add new levels of complexity to our understanding of the paradoxical nature of white privilege and the politics and economics that lie behind the social construction of whiteness, making this edition an even better choice for educators.

Being white: Finding our place in a multiethnic world
by Paula Harris and Doug Schapp

From Amazon: “What does it mean to be white? When you encounter people from other races or ethnicities, you may become suddenly aware that being white means something. Those from other backgrounds may respond to you differently or suspiciously. You may feel ambivalence about your identity as a white person. Or you may feel frustrated when a friend of another ethnicity shakes his head and says, “You just don’t get it because you’re white.”

In this groundbreaking book, Paula Harris and Doug Schaupp present a Christian model of what it means to be white. They wrestle through the history of how those in the majority have oppressed minority cultures, but they also show that whites also have a cultural and ethnic identity with its own distinctive traits and contributions. They demonstrate that white people have a key role to play in the work of racial reconciliation and the forging of a more just society. Filled with real-life stories, life-transforming insights and practical guidance, this book is for you if you are aware of racial inequality but have wondered, So what do I do? Discover here a vision for just communities where whites can partner with and empower those of other ethnicities.” 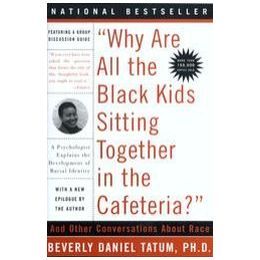 From Amazon: “Walk into any racially mixed high school and you will see black youth seated together in the cafeteria. Of course, it’s not just the black kids sitting together-the white, Latino, Asian Pacific, and, in some regions, American Indian youth are clustered in their own groups, too. The same phenomenon can be observed in college dining halls, faculty lounges, and corporate cafeterias. What is going on here? Is this self-segregation a problem we should try to fix, or a coping strategy we should support? How can we get past our reluctance to talk about racial issues to even discuss it? And what about all the other questions we and our children have about race?

Beverly Daniel Tatum, a renowned authority on the psychology of racism, asserts that we do not know how to talk about our racial differences: Whites are afraid of using the wrong words and being perceived as “racist” while parents of color are afraid of exposing their children to painful racial realities too soon. Using real-life examples and the latest research, Tatum presents strong evidence that straight talk about our racial identities-whatever they may be-is essential if we are serious about facilitating communication across racial and ethnic divides. We have waited far too long to begin our conversations about race. This remarkable book, infused with great wisdom and humanity, has already helped hundreds of thousands of readers figure out where to start.”

White like me: Reflections on race from a privileged son
by Tim Wise

From Amazon: “White Like Me is one-part memoir, one-part polemical essay collection. It is a personal examination of the way in which racial privilege shapes the daily lives of white Americans in every realm: employment, education, housing, criminal justice, and elsewhere.

Using stories from his own life, Tim Wise demonstrates the ways in which racism not only burdens people of color, but also benefits, in relative terms, those who are “white like him.” He discusses how racial privilege can harm whites in the long run and make progressive social change less likely. He explores the ways in which whites can challenge their unjust privileges, and explains in clear and convincing language why it is in the best interest of whites themselves to do so. Using anecdotes instead of stale statistics, Wise weaves a narrative that is at once readable and yet scholarly, analytical and yet accessible.”

As both a parent and a teacher, I have come to view teachers as one of the primary gatekeepers of cultural change and understanding. When teachers understand and present the value of diversity, children learn a new reality that subconsciously shapes their entire worldview.  As a result, I believe that a fundamental skill of teachers of every student at every level is both intercultural and racial understanding. The books below are written specifically to help educators develop this understanding.

From Amazon: “This monograph is focused on educating faculty and administrators about the developmental issues faced by students from different racial, ethnic, or other social groupings as they attempt to define themselves during the college years and the ways this information can enhance campus classrooms, programs, and policies. Although there is a growing body of work on how various racial, ethnic, gender and other social groups develop their identity, there has been limited synthesis or application of this literature to the practice of professionals in higher education. The authors have higher education administrative backgrounds, so their recommendations are grounded in experience, and each also has a solid record of scholarship in identity development. The combined scholarly and administrative experience of the three authors enhances the contribution of this book.”

Courageous conversations about race
by Glenn E. Singleton and Curtis Linton
Watch a video about this series here.

“Courageous conversations” has got to me one of my personal favorite sayings, and this book offers great insights on how to begin such dialogs.  The purpose of the book is to help educators work to close the racial achievement gap in public schools and it explores this through examining characteristics, foundations, and keys to anti-racist leadership.  A facilitator’s guide is also available for purchase.

A powerful book on the impact of white teachers in multiracial schools, Gary Howard’s book is a “Racism 101” text for teachers stepping into the racial dialogue. It’s a remarkably powerful book that chronicles Howard’s own journey toward a deeper understanding of race.

Entering conversation about race as a white male

This is a great documentary where white people reflect on their racial experience.  The entire film is on YouTube.

What white people need to learn by Mary-Alice Daniel

Know of other resources on developing a healthy and humble white identity? Leave them in the comments below.

Error: Twitter did not respond. Please wait a few minutes and refresh this page.