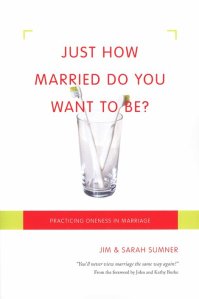 [Disclaimer: Given that I’m not very well versed in the egalitarian-complementarian wars, I’m not exactly sure what I think of Jim and Sarah Sumner’s new book Just how married do you want to be? While I suspect I fall more to one side than the other, I don’t have enough cold hard facts to strongly defend my position, so I approached this book with a bit of both skepticism and intrigue.]

What initially intrigued me about the Sumner’s book is that it is written by a female with her Ph.D. and her former male-stripper husband. Talk about an unlikely couple from which to learn about marriage! Regardless of their theological interpretations of gender relationships, surely they have some deep insight into relationship by virtue of being able to stay married! They did not disappoint. With candor and at times painful honesty, they explore how they have transversed their differences to pursue oneness in marriage. While Sarah details how her pride and selfishness prevented pursuing oneness with her husband, Jim discusses how his background his background and temper affected their relationship. They speak in specifics, exploring how their attitudes, issues, and expectations affect one another and how they have learned to respond differently.

Just how married do you want to be? includes a fairly thorough examination of the texts which speak of women submitting to men and men being the head of the wife. I’m have zero training in Greek translation, so I can’t speak to that, other than saying they make an intriguing argument for one in midst of trying to understand these passages. The Sumner’s basic position seems to be this:

Both the traditional view of marriage where women submit to men (complementarianism) and view in which men and women are equal to one another fall short of the Biblical model.

They suggest that the marital relationship is neither hierarchical nor equal – it is a model where the man and the woman become one. Neither comes ahead of each other, and they are continually moving ahead and behind each other by submitting and sacrificing for the other’s best interest. The ‘Oneness’ model is not an option I had heard of before, so I was intrigued to find out more about it.

By far, the best parts of the book are the honesty with which they speak of marriage. They readily admit it is not an easy venture, and that even the most in-love humans struggle to live love out in daily practice. At times, I found it difficult to follow their ‘turn-taking’ method of writing and had to reread to follow the point. However, they explained this approach at the beginning, and it didn’t significantly hamper my understanding of the book itself. Overall, it strikes me that their proposal of the ‘Oneness Model’ seems to be an important piece missing in the discussion at large about marital relationships. While I still don’t know how much I agree or disagree (there’s so much more to read!), I found it a very helpful piece of the puzzle to turn over and spin around for awhile.

A small sidenote/curiousity: Given the content of this blog, I also find it intriguing to consider a similar application to Christians around the world. What if we are more than equal to one another? What if, because we belong to the body of Christ, we are actually One? How might this affect our relationships with one another? I’d love insight on this if you are so inclined to share…

For further reading, Christians for Biblical Equality has an interesting discussion on the book as well.