Our change.org petition to ask Lego to make their minifigures more diverse is beginning to make the rounds on Twitter (Way to go to those who are sharing it – keep it going, especially on Facebook!), so naturally I’ve received some push back.  It made me think that my mama-bear reaction to fight for what benefits my biracial kids would also benefit from a more thorough reflection of the issue.

I distinctly remember the first time, nearly 15 years ago now, that I saw an ad on the wall in a Springfield, Virginia Wal-mart containing people who weren’t white.  It’s hard to believe now, but back then I did a double take because it caught me so off guard. As a white person, I was so accustomed to seeing only people who looked like me in advertisements that I hadn’t ever considered the fact that they only represented one portion of our country’s population.

A lot has changed in advertising in those fifteen years, and the change had to start from somewhere.  I appreciate the variety of voices who have spoken up for better, non-stereotyped representation of all sorts of people in mainstream media (no surprise that my new BFF is Cheerios!). While there are certainly issues far more serious and pressing than the color of Lego minifigures, in the process of pursuing justice, there are a lot of little stories that matter right alongside the really big ones.  I believe this is one of those little stories.

As we’ve raised biracial children, we’ve searched long and hard for toys and books that reflect a wide variety of experiences, backgrounds and perspectives.  It hasn’t always been an easy or successful effort, but it’s been an important way we affirm this piece of our children’s identity. As a result, while a few may view such a petition as ‘silly’, I view it as yet another small step toward leveling the playing field in our broken racial history, and an opportunity to tell a new story to our children.  Here are a few reasons why:

1. Duplo already did it.  When my son was little, his aunt bought him a whole set of multiracial Duplo figures.  We loved them and are still waiting for the Lego minifigure versions.  Strawberry Shortcake, Dora, Diego, Backyardigans, Little Einsteins, Sesame Street, My Little Pony, Wild Kratts, The Electric Company and so many other brands incorporate characters representing a range of physical appearances. Why not Lego?

2.  People aren’t all one color.  Even if I could buy the rationale that yellow is a neutral color, there’s still the problem of Legos minifigures only reflecting one color. If Lego wants to keep with the ‘neutrality’ theme, then at least they could create a variety of skin tones – green, purple, blue, pink, etc. – if yellow is really neutral, then so are these colors.  Creating more hues would at least acknowledge that skin color varies among people.

3.  Children see yellow as a color for light-skinned people.  When you give children crayons to draw a picture, they reach first for peach to draw light-complected people.  If it’s not there, they pick yellow.  By creating only yellow-skinned figures, Lego leaves brown children wondering why they were left out and doesn’t allow white children to encounter anything but themselves.

1. Children believe what they see.  There is a long history of studies tracking children’s views of race, a recent one being CNN’s doll study on Anderson Cooper that clearly shows both white and black children picking white children as “better, smarter, nicer, more behaved.” This study and many others highlight the need to positively reframe how all children understand and view race (not to mention other characteristics like gender and ability and economic status), and one way we can shift this from a young age is through the subliminal story their toys tell them.

We need to ask ourselves if all children encounter representations of themselves in what they play with or read, and if they ever encounter representations of children who aren’t like them? When one color is dominant, it sends clear messages to both the privileged and the oppressed that the story isn’t changing for anyone. This story hurts us all.

2. Children internalize what they see. It’s no secret that light colors are symbolically good and dark colors are symbolically bad, but we need to pause to consider the deeper story this persistent symbolism teaches our children, particularly in regards to race. By making broad and intentional efforts to redefine the subtle stigma attached to the colors used to represent skin color, toy companies have the opportunity to tell children of all racial backgrounds a story of value for everyone, not just the light-skinned hands that have traditionally held the power.

3. We live in a broken racial story.  Probably the most concerning piece to me about the yellow Lego minifigures (and the predominance of white dolls in general) is the underlying story it tells our kids:  Valuable people are one color only – the lighter the better. This isn’t only damaging to all the brown children out there, but also to the white ones because it never disrupts their perception of the world as just-like-them.

When people suggest that Lego mini-figures don’t have a race, they say it in the context of a world that has struggled under the hand of white racial domination for centuries.  This argument may have been valid in the Middle Ages when skin hue didn’t carry the historical baggage it does today, but this is not our story and we must live within the reality we have, not the one we wish we had. In a world that is rapidly globalizing, we are closer to one another than ever, but the decreasing distance doesn’t automatically produce increased understanding.  To dismantle this broken racial piece of the story we’ve told ourselves, we need to create a new one, one that does a better job sharing and representing power.

So in the end, while yes, making Lego minifigures in brown and peach and tan and butterscotch and caramel and chocolate and beige (or in purple and green and blue and pink and orange for that matter) might be a Little-Story, it’s the good Little-Stories that ultimately make up the good Big-Stories.

The first time I saw someone who looked different than me represented in an advertisement, it made me pause and think, “Oh, yeah. There are more people than just me. Maybe I should consider them, too.” It was only a little story in a blip of my life, but combined with so many other little stories, it’s shaped my Big Story into a more beautiful one than I could have ever imagined.

All the little stories. They matter.

Let’s tell them well – especially to our children – so that we can all tell a better Big Story someday.

When my biracial son wrote this letter to the Lego company about the need for more racial diversity among Lego figures, I started thinking more deeply about the issue.  A friend of mine commented on Facebook that her son (now in his 20s) had written the company complaining that there weren’t any dark-skinned figures because he thought his dark-skinned cousin would feel left out.  At that time, Lego responded that they didn’t make different color mini-figures because “yellow was a ‘neutral’ skin color.”

Have you ever given children a crayon and asked them to draw themselves?  White children use peach – OR YELLOW – for their skin and brown children DON’T.  Not ever. (Unless, perhaps, they wish the were a yellow Lego figure.)  Consider this picture my son drew of our beautiful family (I’m the peach one with the yellow hair.  He and his father are the brown ones): 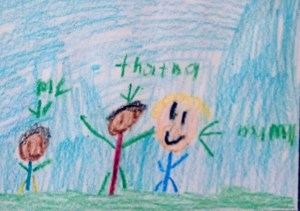 I set aside my son’s offense temporarily until I went to the Lego website to submit his letter detailing his desire to organize his school into a strike against Lego because of the aforementioned ‘neutral’ yellow heads and, much to my great surprise, found this:

Yes, folks, in 2014.  The centuries old narrative of one color dominating the world’s story needs to change.  Its hurting us all.

We now have a black president, 15% of marriages are interracial, over 20% of our country isn’t white, and that this figure is quickly increasing at a rapid rate.  Perhaps Lego missed the headlines that this is the world’s most typical – or in Lego’s words ‘neutral’ – person: 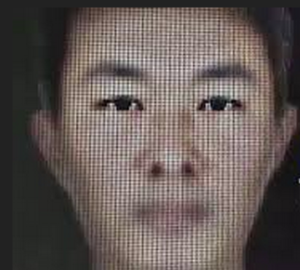 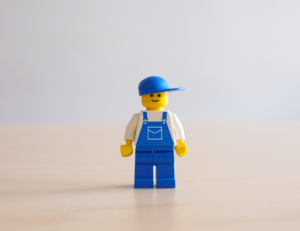 Don’t get me wrong – I LOVE Lego.  I love their creativity and quality and imagination. That’s why it shocks me so greatly that such a genius company dismisses such a significant reality of its consumer market.  Consider with me a few facts about Lego:

Here’s part of a fascinating infographic by visual.ly that gives specific stats about mini figures themselves:

Let’s think about these stats for a minute:

Step up to the plate, Lego.  Surely your unparalleled creativity can come up with a better solution that allows all children to see themselves in your toys given the remarkable history of innovation you have always shown.  Stop the excuses about yellow heads being ‘neutral’ – #werenotbuyingit – even the kids see straight through that one.

Sign our petition to ask Lego to make their minifigures more diverse at Change.org.  Be sure to forward it along to your friends on Facebook or Twitter as well.

Error: Twitter did not respond. Please wait a few minutes and refresh this page.