There are some things that are inherently breath-taking and beautiful: a newborn baby sleeping, the mountains looming, the sea lapping the shore, a wheat field swaying in the wind.  In a world wracked with tragic ugliness, it doesn’t take long for our hearts to recognize the calming power and focus of which such simple beauties speak.  Such aspects of the created order symbolize a value for beauty and unity.  Yet within this reality is also immense diversity – sometimes so diverse it appears more chaotic than beautiful.

As a human race, we struggle much more with the concept of chaos and diversity than we do with beauty and unity.  Ethnic wars rage.  Globalism disregards the little people.  Opposing sides rail against each other.  Yet does it have to look like this?

Are beauty and unity truly pitted against diversity and chaos as the news headlines would have us believe?

Nature certainly gives of a part of the picture of created order.  Yet another piece of this puzzle involves human beings.  Even as we see them inflicting wars, cultural imperialism, trafficking, and bitter divisiveness, we also see humans participating deeply in the stories of reconciliation, empowerment, restoration, and respect for one another.  These people are merging the realities of beauty and unity with diversity and chaos to look something like this: 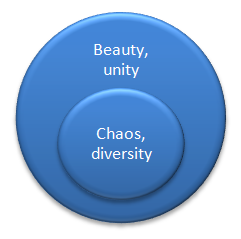 In other words, chaos and diversity exist within the realm of beauty and unity, not as forces working against it.

And what humans know the reality of this co-existence better than we who embody intercultural marriages?  I’d wager a large bet that beauty, unity, chaos, and diversity are integral aspects of our experiences, unable to be separated from each other.  Left unexamined and misunderstood, they do tend to pit us against each other.  But combined with some intense honesty and personal sacrifice, we are part of the picture to a world that desperately needs tangible examples of how to love, not hate.

It is not a task for the feeble-hearted, or for those only interested in learning about new food, new music, new clothing styles or new languages.  It is also not an endeavor to enter lightly with sugary visions of world peace.  It is a day-at-a-time thing, a walking-together path with fierce listening and compromising skills combined with perseverant hope and realistic acceptance.

And after all these things, it, too, is beautiful – albeit in a less visible and more complex way than the mountains and the sea – filled with all of their power and peacefulness, fury and calm.

1 thought on “A complex beauty”